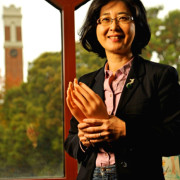 A study using a procedure called the rubber hand illusion has found striking new evidence that people experiencing schizophrenia have a weakened sense of body ownership and has produced the first case of a spontaneous, out-of-body experience in the laboratory.

These findings suggest that movement therapy, which trains people to be focused and centered on their own bodies, including some forms of yoga and dance, could be helpful for many of the 2.2 million people in the United States who suffer from this mental disorder.
The study, which appears in the Oct. 31 issue of the scientific journal Public Library of Science One, measured the strength of body ownership of 24 schizophrenia patients and 21
matched control subjects by testing their susceptibility to the “rubber hand illusion” or RHI. This tactile illusion, which was discovered in 1998, is induced by simultaneously stroking a visible rubber hand and the subject’s hidden hand.
To read more on this story, click here.
https://icmha.ca/wp-content/uploads/2011/11/sch.jpg 600 435 Island Community Mental Health https://www.icmha.ca/wp-content/uploads/2015/01/logo-branding1.png Island Community Mental Health2011-11-03 18:30:002015-01-17 21:55:47Putting the body back into the mind of schizophrenia