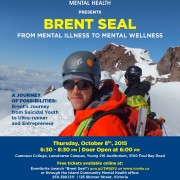 On October 8, 2015, Brent Seal will be speaking on his journey from mental illness to mental wellness. This personal and powerful story will educate and inspire those affected by mental illness, and those who live and work with them.

You can get your free tickets to Brent Seal by clicking this link: Brent Seal – From Mental Illness to Mental Wellness 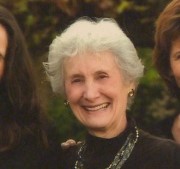 Search and rescue expert says dementia patients are hard to find, but there are some patterns

CBC News Posted: Dec 11, 2013 5:25 PM PT Last Updated: Dec 11, 2013 5:25 PM PT
Concern over the safety of seniors with dementia is growing, following the death of a 76-year-old woman in a North Vancouver park after she wandered away from her care facility.
Dementia patient Joan Warren was not wearing her electronic tracking bracelet when she went missing on Friday and family, friends, firefighters, police and volunteers all joined North Shore Search and Rescue in a huge search operation. Despite an extensive search effort, Joan Warren, who was 76 and suffered from dementia, was found dead near Lynn Canyon two days after she went missing. (Family photo)
Warren’s body was found two days later, off trail, near Lynn Canyon suspension bridge. She had died of hypothermia.
Warren’s family say searchers did their best, but could she have been found sooner?
Robert J. Koester, a U.S. search and rescue expert based in Virginia, who spoke with Stephen Quinn on CBC Radio One’s On The Coast, says dementia patients are the hardest subjects to find, and time is of the essence.
“The sooner you can get more eyes involved, the better. The more urban the area, the better the chance that somebody other than search and rescue is going to make the find,” he said.
In a database he keeps, he’s found that 22 per cent of cases of missing persons with dementia end with the patient found dead — a rate that is far too high — but Koester says he’s identified patterns that can help searchers track what often seems like counter-intuitive behaviour.
Here are five search tips he shared with CBC Radio’s On The Coast:Click here to read on.
https://icmha.ca/wp-content/uploads/2013/12/joan-warren.jpg 169 300 Island Community Mental Health https://icmha.ca/wp-content/uploads/log-300x200.png Island Community Mental Health2013-12-23 22:36:002015-07-15 17:27:025 tips for tracking missing persons with dementia
Scroll to top
Island Community Mental Health