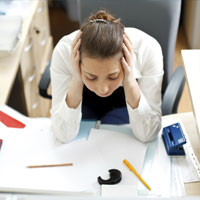 Feeling burned out? You’re not alone. According to a new survey published by ComPsych, the world’s largest provider of employee assistance programs, burnout is up among Americans, with 63 percent of the 1,800 surveyed participants citing work as the root cause of their stress.
This becomes a serious problem because the more a person experiences daily stress, the higher their risk of developing numerous health problems, including heart disease, depression, and obesity, according to the Mayo Clinic.

“Stress also affects productivity,” says Gloria S. Rothenberg, Ph.D., a clinical psychologist who is not affiliated with the study. “Fatigue and mental exhaustion lead to poor concentration and a greater rate of errors,” she says. In fact, more than one-third of the surveyed workers in ComPsych’s study lost an hour or more per day in productivity at work due to stress. Essentially, the more stressed you are about work, the less productive you become. Cue the vicious cycle. Click here to read more.

Family Stress In Infancy Linked to Anxiety in Teen Girls

The Stand Up Kid
Scroll to top