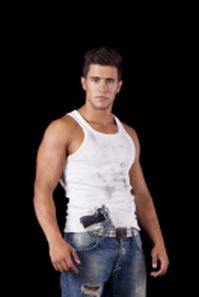 That’s because some ads reinforce a set of views on masculinity termed “hyper-masculinity.”

Researchers said hyper-masculinity is an extreme form of masculine gender ideology made up of four main components:

Prior research has shown a link between hyper-masculine beliefs and a number of social and health problems, such as dangerous driving, drug use and violence towards women.
For the study, researchers analyzed ads in eight, high-circulation magazines marketed to men, from Golf Digest to Game Informer. Megan Vokey, a Ph.D. candidate at the University of Manitoba, and her colleagues considered only the ads where a photograph, picture or symbol of a man was shown.
They then categorized these advertisements using the four components that constitute hyper-masculinity.

They found that at least one of these hyper-masculine attitudes was depicted in 56 percent of the total sample of 527 advertisements. In some magazines, this percentage was as high as 90 percent, according to the researchers. To read more, click here.