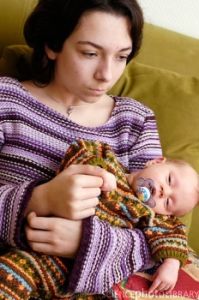 By Janice Wood Associate News Editor
Reviewed by John M. Grohol, Psy.D. on March 2, 2013
New mothers apparently have a much higher rate of obsessive-compulsive symptoms than the general population, according to new research.
The study from researchers at Northwestern Medicine found that 11 percent of postpartum women experience significant obsessive-compulsive symptoms compared to just 2 to 3 percent in the general population.
The symptoms, which include fear of hurting the baby and worrying about germs, are usually temporary, according to the researchers.
Researchers speculate the obsessiveness could result from hormonal changes or manifest as an adaptive response to caring for a new baby.

But if the obsessive compulsions interfere with a new mother’s functioning, they may indicate a psychological disorder, the researchers warn. Click here to read on.

Drinking Or Drugging? 10 Reasons To Tell Your Therapist The Truth

Aggressive Advertising May Make for Aggressive Men
Scroll to top