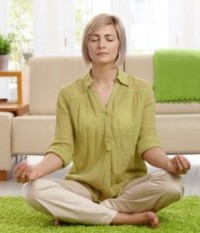 In a number of religious traditions, it is believed that meditation can improve compassion. Now, a study in the journal Psychological Science finds hard evidence to back that claim.
Recent research has already suggested meditation can help individuals lower stress and ease physical disorders such as hypertension or arthritis. The new study extends those beneficial effects to interpersonal harmony and compassion.
Researchers from Northeastern and Harvard universities, led by David DeSteno, Ph.D., invited participants to complete eight-week trainings in two types of meditation. After the sessions, they were put to a test.
For the study, researchers placed two actors in a staged waiting room consisting of three chairs. With one empty chair left, research participants sat down and waited to be called.
Another actor using crutches and appearing to be in great physical pain, would then enter the room. As she did, the actors in the chair would ignore her by fiddling with their phones or opening a book. Click here to read on.
https://icmha.ca/wp-content/uploads/2013/04/meditation.jpg 233 200 Island Community Mental Health https://icmha.ca/wp-content/uploads/log-300x200.png Island Community Mental Health2013-04-10 18:23:002015-01-17 21:55:26Can Meditation Make You More Compassionate?
0 replies

Even A Little Exercise Can Improve Sleep