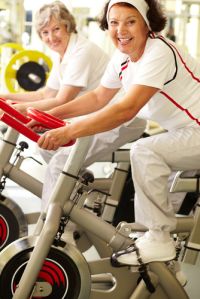 About 70 million people in the U.S. suffer from chronic sleep problems. But a new poll of more than 1,000 Americans finds support for a simple sleep aid: exercise.
“Exercise is great for sleep. For the millions of people who want better sleep, exercise may help,” said David Cloud, CEO of the National Sleep Foundation, which conducted the poll.
Sleep deprivation is associated with injuries, chronic diseases, mental illnesses, poor quality of life and well-being, increased health care costs, and lost work productivity.
In the poll, whose participants ranged in age from 23 to 60, self-described exercisers reported better sleep than self-described non-exercisers, even though they say they sleep the same amount each night (6 hours and 51 minutes average on weeknights).

Vigorous, moderate and light exercisers were significantly more likely to say “I had a good night’s sleep” every night or almost every night on work nights than non-exercisers (67 percent-56 percent vs. 39 percent).
Also, more than three-fourths of exercisers (76 -83 percent) say their sleep quality was very good or fairly good in the past two weeks, compared to slightly more than one-half of non-exercisers (56 percent). Click here to read more.

Shane Koyczan: “To This Day” … for the bullied and beauti...