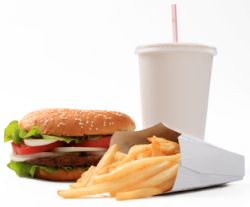 There is a direct relationship between eating fast food or commercial baked goods (doughnuts, cakes, croissants) and the risk of developing depression, according to a recent study by scientists from the University of Las Palmas de Gran Canaria and the University of Granada.
The findings reveal that consumers of fast food are 51 percent more likely to develop depression than minimal or non-consumers.
Furthermore, the connection between the two is so strong that “the more fast food you consume, the greater the risk of depression,” said Almudena Sánchez-Villegas, Ph.D., lead author of the study.
The results also showed that those participants who ate the most fast food and commercial baked goods were more likely to be single, less active and have poor dietary habits (eating less fruit, nuts, fish, vegetables and olive oil). It was also common for individuals in this group to smoke and work over 45 hours per week.
The results were equally consistent in regard to the consumption of commercial baked goods. “Even eating small quantities is linked to a significantly higher chance of developing depression,” said Sánchez-Villegas.
The study sample consisted of 8,964 participants who were part of the SUN Project (University of Navarra Diet and Lifestyle Tracking Program). The subjects had never been diagnosed with depression or taken antidepressants. They were assessed for an average of six months, and during this time, 493 were diagnosed with depression or had started to take antidepressants.
To read more, click here.
https://icmha.ca/wp-content/uploads/2012/04/030105210.jpg 207 250 Island Community Mental Health https://www.icmha.ca/wp-content/uploads/2015/01/logo-branding1.png Island Community Mental Health2012-04-16 23:01:002015-01-17 21:55:41Fast Food Linked to Depression
0 replies

The Labeling Paradox -Stigma, the Sick Role, and Social Networks in Mental ...